Your preference has been updated for this session. To permanently change your account setting, go to My Account
As a reminder, you can update you preferred country or language anytime in My Account
Email a Friend!

Flash Deals are limited time, limited quantity promotions, so act fast! Limited to: 1 unit of 1 flash deal product per order. If you order more than one unit or re-order or order other flash deals, you will pay our regular low price. Flash Deals are ineligible from all other promotions. 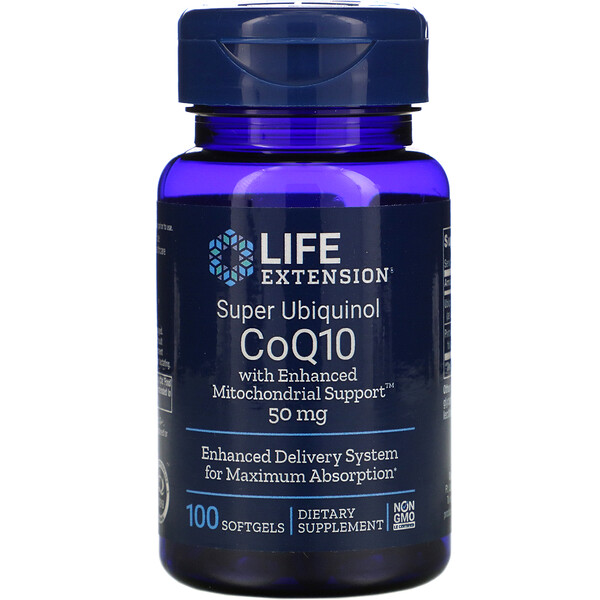 #28 in Ubiquinol, CoQ10 >
Frequently Purchased Together

Benefits at a Glance

CoQ10 (or coenzyme Q10) is an essential nutrient your body requires for healthy mitochondrial function, a process that produces body energy at the cellular level. Because of this, it makes sense that CoQ10 is concentrated in high-energy organs such as your brain, liver, kidneys, and (most importantly) your heart.

As we age, CoQ10 levels in our body naturally decrease. What’s more, popular statin drugs which are used to lower cholesterol, can also deplete CoQ10 levels in the blood and potentially in tissue.

And while statins have been shown to reduce plasma CoQ10 by nearly 40%, the normal aging process may be even worse: reducing CoQ10 levels in the heart muscle wall by as much as 72%.

The traditional form of CoQ10, ubiquinone, is difficult for the body to absorb. But another form, ubiquinol, has been shown to absorb up to 8 times greater than ubiquinone. That’s why Life Extension offers a highly bioavailable form of ubiquinol CoQ10 in a patented delivery system with superior absorption levels.

In middle-aged mice, ubiquinol was up to 40% more effective at slowing measurements of aging compared to ubiquinone. In another preliminary study in mice, the combination of CoQ10 and shilajit produced a 56% increase in cellular energy production in the brain — 40% better than CoQ10 alone. Muscle tissue saw a 144% increase, which was 27% better than with CoQ10 by itself.

Read the entire label and follow the directions carefully prior to use.

Take one (1) softgel once or twice daily with food, or as recommended by a healthcare practitioner.

Visit Manufacturer's Website
iHerb Customer
An iHerb Customer has completed a transaction, and has accepted the Terms & Conditions